Rock The Nations - Saxon - The Collection 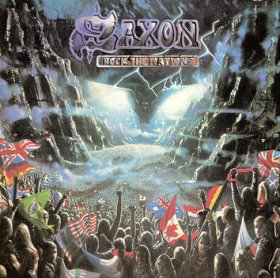 And it's because the village is full of tourette's sufferers that feel the need to randomly shout out criticism, claiming it's disrespectful to make the father walk, cruel to make the donkey carry both of them, dumb to not use the donkey I can't remember why the dad can't ride it by himself.

Maybe the son had leprosy or something. Oh well. The moral of the story is everyone's an asshole, and Rock the Nations sucks. If you haven't gathered this, Rock the Nations placed way too much stock on compromise, resulting in a practically incoherent psychosis of triumphant Wheels of Steel retreads interspersed with mawkish glam rock sedatives like we've recently been suffering through.

The most notable example of each Rock The Nations - Saxon - The Collection 'Battle Cry' and 'You Ain't No Angel', with the former following the recipe for a great Saxon tune almost verbatim. Nigel Glockler cooks up a phenomenal rolling drum pattern, complimented by Biff's selectively harmonized vocal lines, and Quinn ties the whole package together with a memorable riff.

Texas Tyler - His Great Hits came. Substanceless tracks like 'Empty Promises' and 'Waiting for the Night' have a decided lack of atmosphere, emotion, and well, songwriting. The major scale leads are like sweet bubble gum that immediately loses its flavor, and by the third or fourth minute, the circuitous rock riffs are only tasting of spit and disappointment. Meanwhile, Biff incessantly wails his polysyllabic "Ooohohoh's" and "Yeahuh's"; something that no one enjoys except possibly James Hetfield.

Play It Loud. Spotify Amazon. And the Bands Played On Saxon. Ride Like the Wind Christopher Cross.